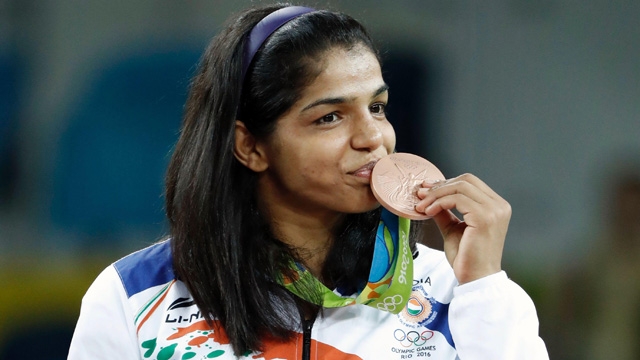 Preparations for her rousing reception are underway at her village Mokhra Khas in Rohtak district. Speaking to Times Now after she landed, the 23-year-old said she had long dreamed of winning a medal at Rio.

“It was my dream and hard work of years,” Sakshi told Times Now. “Since long I had thought of going to the Olympics to win a medal for the country. It finally happened in Rio,” said Sakshi.

She went on to thank wrestlers Geeta Phogat, Sushil Kumar and Yogeshwar Dutt for their contribution to her success. “It was inspiring when Geeta Phogat qualified for wrestling as she was the first Indian woman to qualify for Olympics. It lit a hope that if one weight category can qualify, there can be more. She also has a hand in my victory. A lot of people including Sushil Kumar and Yogeshwar Dutt have played big role in my victory,” said Sakshi.

Sakshi will be felicitated by Haryana Chief Minister Manohar Lal Khattar on Wednesday in a felicitation function where over 30,000 people are expected to come. Sakshi will be honoured with a cash award of Rs 2.5 crore for her bronze medal effort by the state government.

Before she heads to Rohtak, Sakshi will be welcomed near the Delhi-Haryana border at Bahadurgarh where prominent sportspersons, senior officials of the state government, will receive her.
Source by indiatimes…
Share: